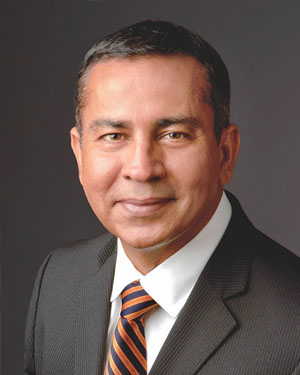 An accomplished physician-scientist and board-certified ophthalmologist, Rohit Varma is recognized worldwide as a visionary leader in glaucoma and the epidemiology of eye diseases. He is an expert on changes in the optic nerve in glaucoma and is also studying new imaging techniques in the early diagnosis of glaucomatous optic nerve damage. His primary research focuses on epidemiologic studies of eye disease in children and aging populations. He is principal investigator of several National Institute of Health-funded studies, including the African American Eye Disease Study, the Chinese American Eye Study, the Los Angeles Latino Eye Study and the Multi-Ethnic Pediatric Eye Diseases Study. His epidemiological studies have significantly impacted health care policy and have allowed for a deeper understanding of how disease affects different populations. Most recently, Rohit Varma has been involved in the development of novel implantable intraocular pressure sensors and drainage devices.

He also served as principal investigator for studies on blindness and vision impairment for the World Health Organization. Rohit Varma is one of the highest National Institutes of Health-funded vision investigators, with continuous funding for more than two decades, demonstrating the importance, relevance and impact of his work.

Rohit Varma has authored or co-authored more than 275 journal articles in peer-reviewed journals and edited or authored three books. He serves on the Institute of Medicine's Roundtable on Health Disparities and served on the board of the Scientific Counselors of the National Eye Institute.

He is a member of several prestigious academic societies, including the Association for Research in Vision and Ophthalmology, the American Glaucoma Society and the American Academy of Ophthalmology, which has awarded him its Secretariat Award and its Lifetime Achievement Award. He also received the Innovation in Medicine Award from the National Medical Fellowships Foundation and the President's Award from the Glaucoma Research Foundation. Most recently, Dr. Varma was named an ARVO Gold Fellow for exemplary contributions and dedication to vision science research and mentorship.

Prior to founding SCEI, Rohit Varma was professor of ophthalmology and preventive medicine and the Grace and Emery Beardsley Chair in Ophthalmology at Keck School of Medicine of USC. Previously he served as dean of the Keck School of Medicine of USC, and president and chair of the Board of Directors of USC Care. He was also chair of the Department of Ophthalmology, and founding director of the USC Gayle and Edward Roski Eye Institute. He also served as associate dean for strategic planning and community network development.

Rohit Varma also served as professor and chair of the Illinois Eye and Ear Infirmary at the University of Illinois at Chicago where he held the Charles I. Young Endowed Chair of Ocular Research and served as associate dean of strategic planning.

Rohit Varma completed his residency in ophthalmology at the internationally renowned Wilmer Eye Institute at Johns Hopkins School of Medicine, as well as earning a master of public health degree from Johns Hopkins School of Public Health, both located in Baltimore. He completed two glaucoma fellowships, one at the Wills Eye Hospital in Philadelphia and the other at Keck School of Medicine of USC. A native of India, he obtained his medical degree from the University of Delhi.